Twitter locked  yet another account of bestselling conservative author Ann Coulter over a tweet praising Kyle Rittenhouse, despite the fact that the platform initially informed her that her tweet did not violate the rules.

Coulter says the platform also deleted the tweet on her behalf, not giving her a chance to appeal the decision.

“I want him as my president,” Coulter said of Rittenhouse, the 17-year old who allegedly shot three rioters in Kenosha who attacked him, killing two and injuring one.

Videos of the incident show one of the rioters aiming a pistol at Rittenhouse before being shot.

It looks like Kyle Rittenhouse was about to get a bullet in the head from a handgun from this angle. pic.twitter.com/8yyWKzcpa1

“I decided to appeal it. I’m on vacation until after Labor Day anyway. But by appealing, that means I CAN’T TWEET until they decide my appeal. So I’m guilty until they rule,” said Coulter in a comment to Breitbart News.

“This 1) makes no sense inasmuch as they’ve already removed that tweet, so why not let me tweet in the meantime?; and 2) is clearly total bs. Inasmuch as ANOTHER twitter administrator expressly ruled that the precise tweet that got me suspended violated no twitter policies.”

A screenshot provided to Breitbart by Coulter shows that her tweets were initially found to not violate Twitter’s policies. 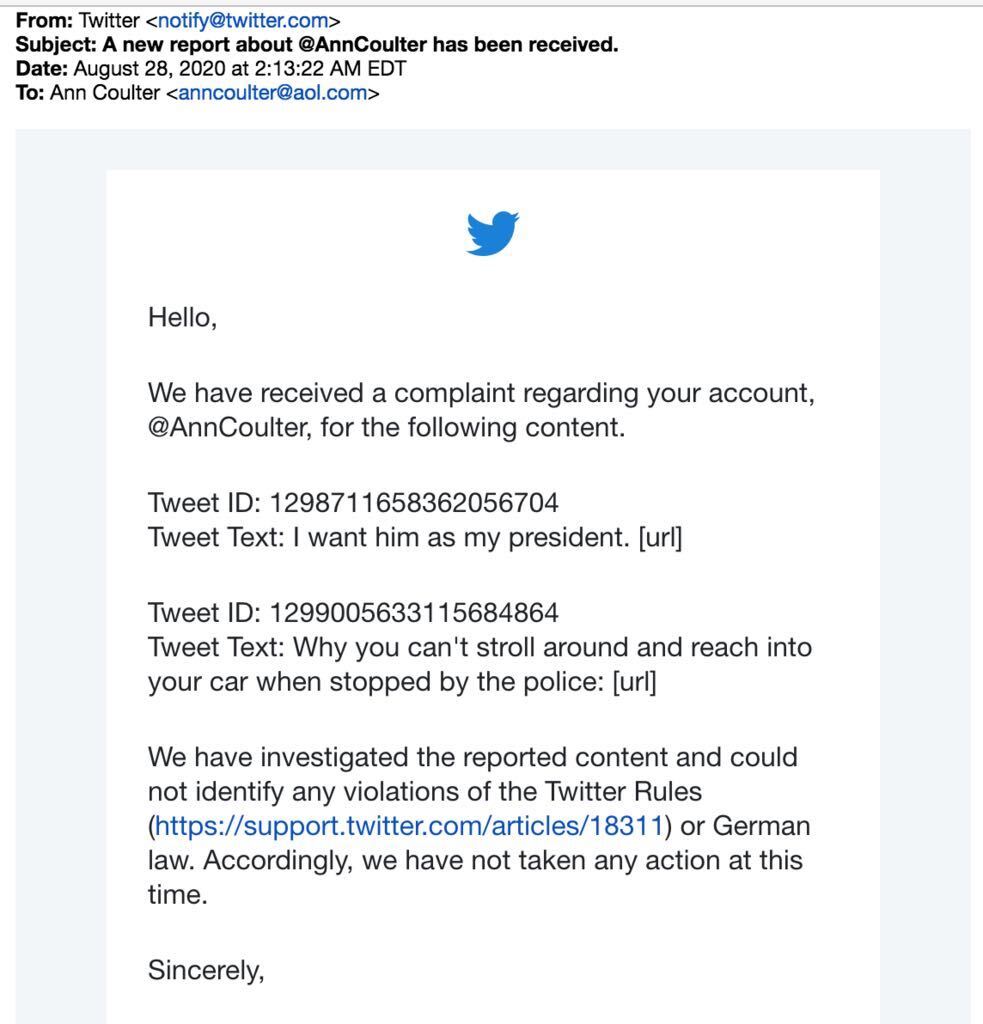 “We have investigated the reported content and could not identify any violations of the Twitter Rules,” says the message.

The reference to “German law” refers to Germany’s practice of forcing Twitter to comply with its hate speech law, with potential penalties of 50 million euros if the platform fails to comply.

In a statement to Breitbart News, Twitter confirmed that it had taken action on the tweet “I want him to be my president.”

“The Tweet glorified violence, specifically condoning an act of violence that may be replicable by a civilian,” said a Twitter spokesman. “It will need to be removed by the account owner before they continue back to Twitter.”

Is Twitter’s Hack and inside job? – Hackers Convinced Twitter Employee to Help Them Hijack Accounts?