Demonstrators protested near the White House against the Republican politician National Convention, attempting to drown out the event with loud songs and also incantations while beheading President Donald Trump’s effigy with a mock guillotine.

Protesters blared music, shouted slogans and beat drums in the nation’s capital on Thursday, many gathered not far from the White House, where Trump gave his acceptance speech to a live audience of more than 1,000 on the final night of the RNC.

With the White House as a backdrop, activists chant “Black Women Matter, because we get stuff done” #dcprotest pic.twitter.com/GM92w7yIX9

A number of activists congregated around St. John’s Episcopal Church less than half a mile away from the White House – which was damaged by fire during unrest that broke out in June over the police killing of George Floyd – chanting “if we don’t get [justice], burn it down!”

Protesters in front of St Johns Church chanting if “we don’t get it (justice) burn it down!” pic.twitter.com/KDq73c0Knj

Trotting out a number of props, demonstrators also posed with an imitation guillotine and an effigy stand-in for Trump – one heard saying “off with his head!” – while another protester showed up in a costume police uniform, complete with pig mask, which others pretended to shoot. 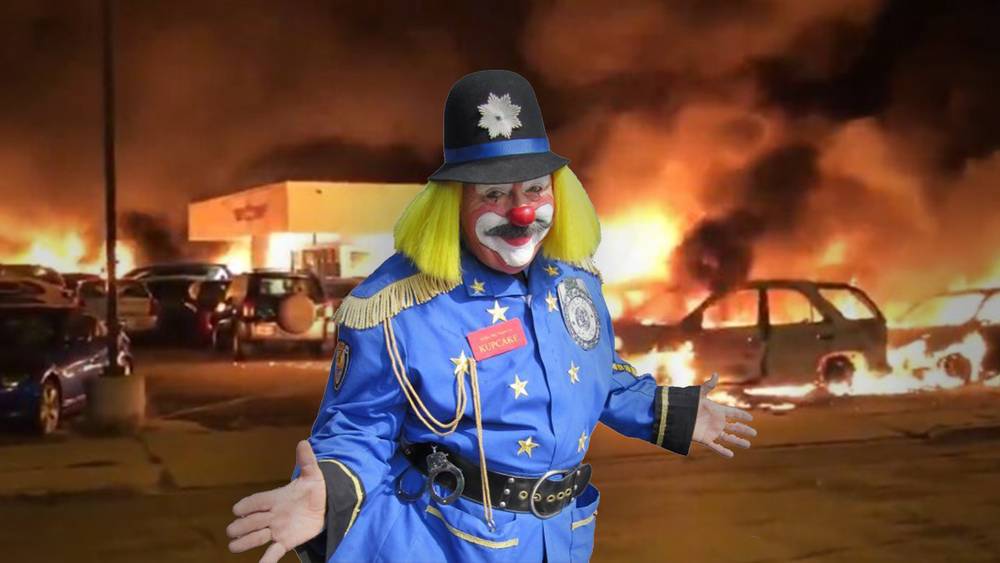 Someone just put a fake Trump on the guillotine in front of the White House. There’s a piece of paper on him that says “Ticket – Fascist, Rapist, Criminal”@DailyCaller pic.twitter.com/zOmQ7DgIo0

A man is pretending to shoot a guy dressed like a cop in a pig mask pic.twitter.com/8rJmu5lzhJ

Raucous dance parties were held in some locations, where activists made as much noise as possible in hopes of disrupting Trump’s address, some banging on pots and pans and using noisemakers. Some 10 minutes into the president’s speech, chants and horns could be heard faintly in the distance, captured on some live television broadcasts.

GoGo band concert is trying to blare as much noise as possible outside the White House right now. “Louder!” The group is frequently chanting #dcprotest pic.twitter.com/OwBBoYGTNp

15th and Pennsylvania. Protesters are waving noisemakers and shooting fireworks right outside the White House gate in an effort to drown out President Trump’s speech. (@wusa9) pic.twitter.com/q5zXRu3rfr

At one point during the protest, an elderly man was struck in the head and knocked to the ground. Though protesters accused the man of assaulting a female activist, he insisted he was merely there “to see the fireworks” for the RNC and repeatedly denied hitting anybody. He was briefly accosted as he attempted to leave the area, but ultimately was allowed to go on his way.

a camera man was just chased out pic.twitter.com/GqTJRSG2ml

Protesters claim elderly man “assaulted a black female.” He denies the charges adding he was there to “see the fireworks.”

DC Protesters continue to harass the man as he walks away. pic.twitter.com/hh77M3iaho

Following a massive fireworks show for the RNC’s finale, police moved in to clear away demonstrators from some locations around the White House, sparking scuffles between protesters and law enforcement.

At least two different organizations planned demonstrations near the White House on Thursday night, according to USA Today, including Refuse Fascism – which held a rally in Black Lives Matter Plaza – and the Party Majority PAC, a group founded by former Hillary Clinton aides. Though a co-founder of Refuse Fascism, Carl Dix, said he expected only a small crowd to show up to the event, he noted a spike in interest due to the police shooting of Jacob Blake in Wisconsin on Sunday, which has spurred heated demonstrations across the country.