Based on a tip from a concerned student at the University of Michigan, Campus Reform investigated an email from the college’s student newspaper, the Michigan Daily, to its staff.

In a 19-slide presentation titled “Columnist & Cartoonist training,” the paper explicitly told staff not to use Fox News as a source. 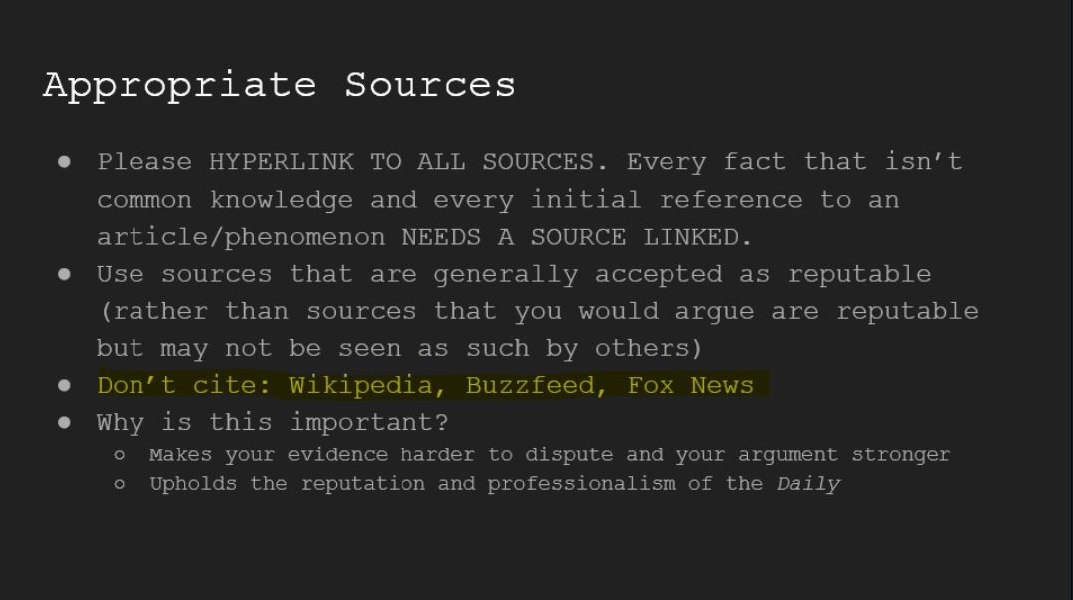 On slide 7, titled “appropriate sources,” it stated, “use sources that are generally accepted as reputable.” Then, it goes on to instruct the staff not to cite Fox News. Also included in the “Don’t Cite” category are Wikipedia and Buzzfeed.

The newspaper did not instruct students to refrain from citing left-leaning cable news outlets, such as CNN or MSNBC.

The presentation explained this is important because it makes evidence “harder to dispute” while upholding the student paper’s reputation.

Valentina House, a conservative columnist for the Michigan Daily and Campus Reform correspondent, said it was disheartening to find out about this rule.

“The Daily claims to stand for intellectual diversity, but this rule directly contradicts that claim,” House said. “The Daily considers credibility a factor when choosing appropriate sources, but they don’t provide nearly the same scrutiny for left-wing outlets.”

After slamming the paper for what she called a “double standard,” House shared that she feels conservative voices are being repressed.

“Because they don’t provide any reasoning for this choice, this rule seems like no more than a backdoor attempt to try and constrain conservative voices and illegitim[ize] Fox News,” House told Campus Reform.

“The entire point of journalism is to give the complete story in an attempt to sway the audience to take a position or stance presented, or to take their own stance that they interpret,” Adnane says. “Completely ignoring one side isn’t going to convince anyway, but rather strengthen each side’s belief in their own argument.”

In response to Campus Reform’s inquiry, the Michigan Daily changed course and says it will no longer single out the network.

“Our intention with including that line was to discourage columnists from solely using news sources that are known to have a strong political lean,” the paper told Campus Reform. “While we will continue to discourage this, we should not have singled out Fox News, and will remove that line from future training slides.”

Campus Reform also reached out to the University of Michigan directly for comment.