The taxpayer-funded welfare queens at NPR are using your tax dollars to straight-up lie about something President Trump said about Kyle Rittenhouse.

Rittenhouse is the 17-year-old from Kenosha, Wisconsin, charged with six crimes, including first-degree murder.

Last week, the governor of Wisconsin, Tony Evers — a Democrat who pronounces his name Eeevers like some pretentious Valley Girl — refused to send the necessary number of National Guard troops to Kenosha to protect the small city from the domestic terrorist groups Antifa and Black Lives Matter that were determined to burn it down. So… 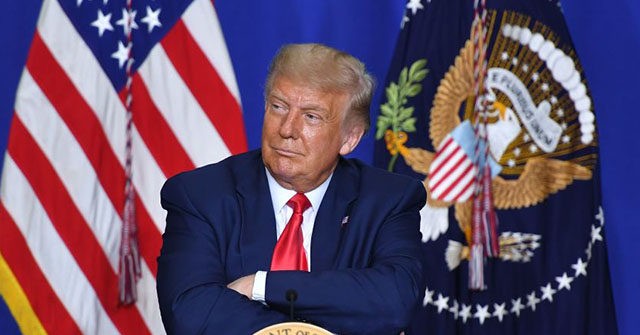 Rittenhouse showed up with a gun. Said he was there to help. One thing led to another. He’s charged with shooting and killing two people, injuring another.

Trump was asked about Rittenhouse Monday and said…

We’re looking at all of it. And that was an interesting situation. You saw the same tape as I saw. And he was trying to get away from them, I guess; it looks like. And he fell, and then they very violently attacked him. And it was something that we’re looking at right now, and it’s under investigation. But I guess he was in very big trouble. He would have been — he probably would have been killed.

Videos of the Rittenhouse shootings are all over the Internet. I want to be careful here. As I wrote Monday, we know what we know from the videos. We don’t know what we don’t know. So I’m not making a call either way. But no rational person can look at the videos and argue Rittenhouse was not — at least in the videos — under deadly attack. In one video he’s swarmed, including by a guy holding a firearm.

In another, a guy’s chasing Rittenhouse with something that’s on fire. The guy hurls the flaming object at him. Could have been a Molotov cocktail.

Happen to find his handgun? He pulled it out when he went to attack the guy with the rifle who then shot him in self defense it appears. See these pics and vid. https://t.co/5m4PWVkHL8 pic.twitter.com/ZkZ0dBqv07

This is clearly evidence — again, not definitive evidence — but evidence nonetheless that Rittenhouse was 1) swarmed, 2) menaced by a guy with a gun, 3) tried to run away (this will be important in court), and 4) chased by a guy who threw something on fire at him.

That is all on video.

So nothing Trump said is inaccurate. He caveats his words with “I guess; it looks like” and “guess” and “probably”… The president probably shouldn’t comment at all on an ongoing criminal case. But that’s another argument. All I’m saying is that video after video clearly backs up everything Trump said.

So what did the godless welfare queens at NPR say about all this.

I don’t link fake news, but I swear this is how the godless welfare queens opened the article:

President Trump on Monday declined to condemn the actions of the 17-year-old suspect in the shooting of three protesters against police brutality in Kenosha, Wis., claiming, without evidence, that it appeared the gunman was acting in self-defense. [emphasis added]

The godless welfare queens at NPR are claiming Trump had no evidence to back up his belief Rittenhouse might have acted in self-defense.

Of course there is evidence — not definitive evidence — but a buttload of evidence all over the place Rittenhouse was acting in self defense. Video evidence. VIDEO.

The welfare queens at NPR are just straight-up lying.

Straight up lying… Using our tax dollars to deliberately mislead those still stupid enough to pay them any attention.