Rioters in Oakland, California, threw projectiles and shone lasers at police on Saturday night during a violent demonstration, ostensibly linked to the Black Lives Matter movement and outrage over the shooting of Jacob Blake in Kenosha, Wisconsin. 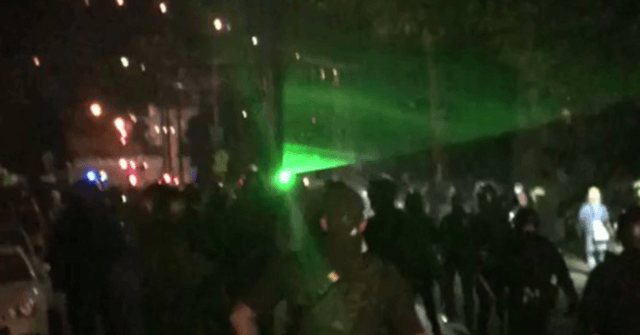 Rocks are being thrown at officers. Crowd is using shields to assult officers. OPD is advising crowd their criminal activity will not be tolerated and those violating the law will be arrested. pic.twitter.com/DrEIKwbGzD

Some within the crowd are throwing rocks and bottles at officers. One officer was injured near the intersection of Mandana and W.arfield. Please avoid the area. pic.twitter.com/PoSgZ4XjqU

Some within crowd are throwing objects and pointing lasers at officers. Penal Code 417.25 makes it a crime for a person to point a laser scope, or a laser pointer, at another person in a threatening manner. The offense is a misdemeanor, carries a penalty of up to 30 days in jail. pic.twitter.com/cFmoHzu4uR

Protesters demonstrated in Bay Area cities on Saturday to demand justice in the police shooting of Jacob Blake, a Black man who Wisconsin state investigators said was shot multiple times, including in the back, by a white police officer in Kenosha. Blake’s family says he is paralyzed.

A demonstration in Oakland Saturday night turned violent, with police tweeting that some protesters were throwing rocks and “using shields to assault officers.” In a 4-second video shared to the Police Department’s Twitter, an empty glass bottle can be seen barreling toward the direction of police officers.

Shortly before 10:45 p.m., a Twitter user named Bonnie brunet tweeted that roughly 250 protesters were assembling peacefully but were “prepared to get hurt” and arrested by police. While the demonstrators marched, the protester said, about 100 police “encircled them on foot” and in about “30 police cars, vans, plain clothes cars, & motorcycles.”

President Donald Trump is scheduled to visit Kenosha on Tuesday to survey the damage after a week of unrest, which included the torching of many businesses and two shooting deaths during a riot last Tuesday night.

Joel B. Pollak is Senior Editor-at-Large at Breitbart News and the host of Breitbart News Sunday on Sirius XM Patriot on Sunday evenings from 7 p.m. to 10 p.m. ET (4 p.m. to 7 p.m. PT). His new book, RED NOVEMBER, tells the story of the 2020 Democratic presidential primary from a conservative perspective. He is a winner of the 2018 Robert Novak Journalism Alumni Fellowship. Follow him on Twitter at @joelpollak.